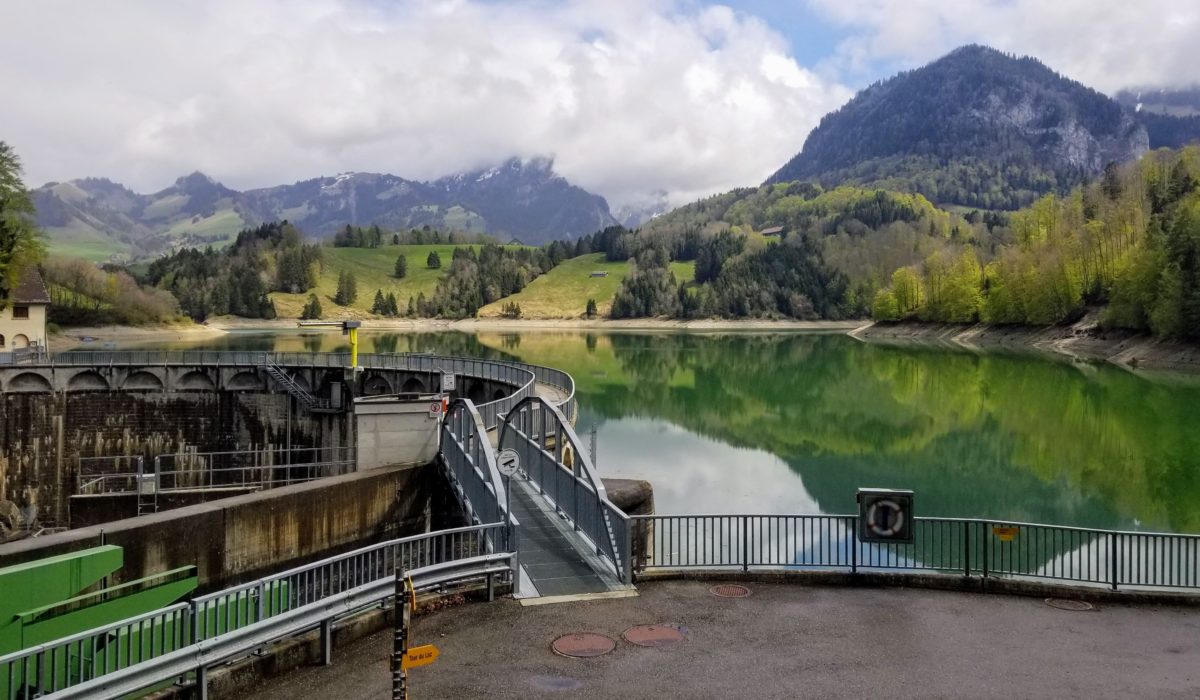 This time last week I would have been writing to you with this view before me:

That’s the French Alps you see in the distance, and it’s also the view from my dear friends’ apartment in Lausanne, Switzerland. I landed in Lausanne on a Thursday afternoon, and by Sunday was making my way to Lisbon, Portugal. The time in-between, however, was far from wasted.

Since the three of us were free to adventure on Friday, we rented a car and headed to Gruyères and nearby Broc. Our plan was to take in some nature in Broc, then visit the H.R. Giger museum while also perusing the medieval town of Gruyères where the museum is located. It was a great plan for the day, and we kicked if off with some coffee in Broc.

Our hike was nothing short of amazing. The trail, which closely followed a river, sat at the bottom of jagged, striated rock walls on both sides of the water. These elements allowed for spooky caves to venture through and beautiful bridges to cross. The ascent culminated in a view of a large dam and reservoir for us to admire.

Despite the jaw dropping beauty at every turn, what most appealed to me was the signage placed at critical points in what seemed like backwoods areas.

The Swiss are a walking folk, so hiking 6 kilometers then strolling (that’s a lie, the Swiss don’t stroll, they walk like any good New Yorker might) several more to the next village isn’t a stretch.

We American, French, and German folk are not Swiss, thus at the end of our hike we opted for the bus back to the car. Along our short bus ride, I noted a few people walking the area, and a quaint, cozy feeling came over me. It was just so cool to see people living in and walking through seemingly remote sites as if it they were in a bustling city. It shows a level of trust and community, and a oneness I think.

Back at the car, we made our way to Gruyères and the museum. As you can imagine, the sites were still amazing. The museum itself was impactful. For those that don’t know H.R. Giger is the creator of the Alien films. The museum showcased these and other works of his, as well as his private collections. His work is extremely detailed, but also houses a great deal of balance of machinery, humanity… and the occult. Did you know Giger drew a Tarot deck? Nor did I, dear reader. Nor did I.

What impacted me the most, however, was my imagining his frame of mind. I asked myself if someone who created such arts, and had such successes with them, was happy. Or were they so driven to create a world, or so tormented by their imaginings, that they never found peace?

Experiencing these beautiful places and the delicious treats they offered was lovely, but it was nothing in comparison to what my friends and I did throughout the day and later that night (and for the rest of the weekend, really).

We talked to each other. Lovely, enriching, detailed, adult conversations were had. Not once did a television screen go on (I don’t think they had one, actually). Not once did we allow ourselves a chance to be distracted. Instead we shared and debated and learned from each other. It was my version of heaven.

The inspiration only continued on Saturday when we met a friend and walked down to the Lausanne market. We picked up goods for the dinner we were making that night (Tarte Flambée or Flammekueche, depending on your heritage), one of the most important being cheese.My friend tried to acquire this cheese no less than 4 times before succeeding. (It should be noted there were cheese stands throughout the market, but the best cheese purveyor had quite the line in front of him most of the day. Finally, the line died down and we were able to purchase… what can I say… you have to love the French and their love of quality ingredients.)

We spent the afternoon walking through the Olympic Museum Park, then along Lake Geneva, again talking, sharing, connecting. Then the friend returned for our dinner, and we spent my last night in the city debating our profession and other highly important topics (which I honestly can’t remember, but I’m sure they were important).

When I woke up on Sunday, I was sad to be leaving, but I was also happy in realizing I had learned my lesson, and because I was much more invested in manifesting a great time in Switzerland, a great time was had.

I said goodbye to my friends at the train station while sincerely hoping to see and talk to them again soon. I then turned into myself, considering the month ahead in Lisbon… but that is for another post.