I’m writing this post on the Friday after American Thanksgiving. (NOTE: I refuse to call this day “Black Friday” in my protest against worshiping materialism. Hey… I’m trying here.) I sit reflecting on the events of yesterday which involved me driving across a city I’m not from to have Thanksgiving dinner with a high school friend and her family. The day was humbling, but it was also very comforting.

My biggest take away from the day, at least so far, is how un-alone and taken care of I feel even as I travel the country alone. As I think about yesterday I consider how far I am from the girl I was in upstate New York those 20 years ago, and yet, how I had Thanksgiving dinner with people I know and love from that time in my life. Strange how that happened, right?

So many steps have been taken in-between, and still they led me right back to where I was. I’m changed, yes. Those around me changed as well, of course. But, there’s something that binds us; some sort of deep experience which chiseled its way into our roots and changed us forever.

During these reflections, I also think about, and am grateful for, how much more comfortable I feel in my life. Besides these moments where I’m reinstated into my comfort zone from old, I’m finding goodness and comfort when outside that zone as well.

For example, my travel from Albuquerque to Charlotte involved me flying standby. For those of you who haven’t experienced it, standby is an adventure I recommend going through at least once. It’s a trip… pun intended.

In this case I was flying as a guest of an employee (NOTE: This is called a “non-rev” ticket which I’m gathering stands for Non-Revenue ticket) and this status put me at the bottom of the standby totem pole (NOTE: Employees and their family members get a higher status than my ‘guest’ status). Being at the bottom of said totem pole meant I would be the first to get bumped from a flight if it filled up. The plan was for me to get to the airport early to increase my chances. (NOTE: by early we are talking 4 AM. Yeah, that early.)

When I got to the gate, I told the agent I was flying standby. She took my name then asked me to sit it out and wait. Several moments later my friend in Charlotte said my chances of getting there were slim to none if I followed our original path. She suggested I go speak to the gate agent and ask her advice. I began panicking. I didn’t want to spend the whole day trying to get on a flight only to get stranded in a random city.

So, as the agents began boarding guests on the plane, I went up to the desk afraid to be interrupting their most important task. I explained my situation to one of the agents, apologized for the inconvenience, and hoped. She immediately put me at ease. “No worries. I’ll take care of you like I take care of my kids in these situations.”

Sure enough, she re-rerouted me completely and I made it to Charlotte several hours later. I have no idea why she bestowed her kindness on me, but she was sure to add, “Don’t you worry, girl. I’ll be watching over you all day.” Wow!

Shortly after this interaction, I was seated waiting for the next flight when I man sat down next to me. We began talking and very soon got to the topic of my location independent life. Instead of asking me the usual questions, he said, “Do you get bored”?

You know it, Mister.

Come to find out he was once a nomad himself. We carried on an in-depth conversation where he shared his experiences, reaffirmed my lifestyle, and provided me the ever needed comfort and confidence.

So you see, between yesterday, and moments like those I’ve shared here, it’s hard to feel alone in the world even when I spend SO much time alone. These moments, though not new, have also become so much more meaningful and impactful as I’ve stripped away the noise which once distracted me from them.

I like to think there are always characters like these coming on and off the stage in this play we call life. My goal is to be the best version of myself during those scenes, and the ones in-between too. 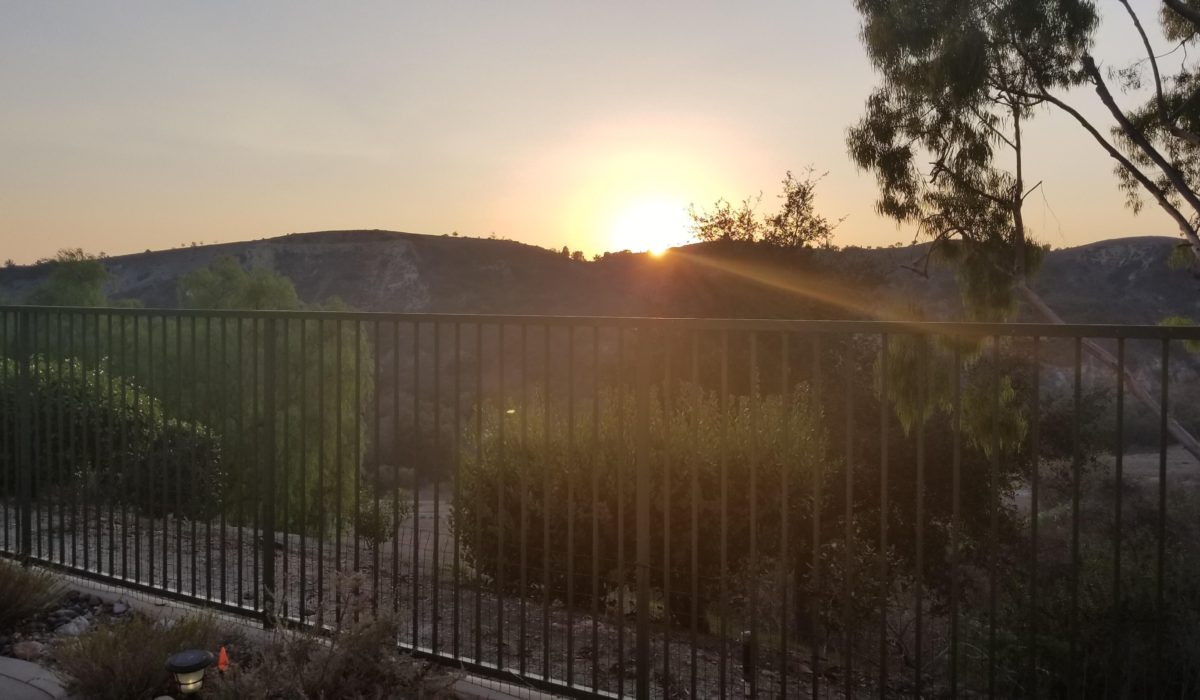 I spent yesterday afternoon catching up with a dear friend who drove all the way up to Dana Point from San Diego (dear friend and podcast co-host) just to see me. How special I felt!

As we were talking about our respective lives my friend made the comment, “It’s hard to be creative on the road”. Her statement stopped me because I realized how right she was. I was hoping that along this journey I’d make the time to sit and write beautiful pieces about a life well considered. Instead I find myself barely able to scrape together an hour or two to write random ramblings which, when I’m finished with them, I feel unable to share to a wider audience for fear of my terrible writing ability being exposed.

I suppose this means my dreams of being a wandering writer are not to be… or maybe they are just on hold. Whatever the case, fear not! I ramble on… which is exactly what I wanted to do today.

Today I write to you from a house sit I’m doing in Rancho Santa Margarita, California. Or for you “visual people” out there, this place:

I arrived here last Sunday (I’m writing to you on the following Sunday), and the homeowners left for Alaska on Wednesday. This meant I had about 2 and a half days where our time in the house overlapped. (By the way, for those of you considering house or pet sitting I highly recommend having time where you overlap with the homeowners. It really helps everyone get more comfortable with each other.)

For some this situation can be a very uncomfortable one. I’ll admit it is still somewhat uncomfortable for me. There were many times I caught myself thinking things like “These people must think I’m a weirdo. What kind of person just comes to a stranger’s house and lives there for a few days when they haven’t even left on vacation yet? What kind of adult does this?!” I also felt a heavy burden of shame for doing something so “weird”.

It wasn’t until yesterday when I had a discussion with another dear friend (who is also a wanderer) where I realized all those feelings and thoughts were part of an old story I’ve been holding on to. A story I no longer need. (NOTE: This realization would not have been possible without my sharing this shame. A lesson I learned from this book.)

In reality, getting to know these homeowners better was an amazing experience! They showed me kindness. They showed me a healthy relationship between each other. We talked about life, love, family, and everything! We had happy hour and dinner together. We were human together.

Had I defaulted only to my old story line, I would have missed all of this.

In fact, there are so many wonderful things I would missed out on had I chosen to stay with the old story and not started this adventure. One specific example is the amazing amount of kindness which gets extended to me when I bring big bags on trains. I’m always concerned about how I’ll get on and off the train in time when I have heavy luggage with me, but without fail someone offers to help me. I have never once had to ask for help!

On my last train trip a few weeks ago, a man asked if I needed help when getting off the train. I said I did to which he responded, “I’ve been through it when traveling with my 4 year old daughter. I’m happy to help!”. From there he went on to share with me his tales of travel with children. It was another moment where I was able to just be human with someone.

It’s these moments I’ve come to treasure. I want more of them, and I want to be fully present in them without the shame and doubt. To get there, I’m sharing the shame further with you here. From this, I hope to let the old story go even more.

Although my travel has slowed from road tripping, it will still involve running into new people and seeing random beauty which is something I’ve realized I thrive on AND something I’m incredibly excited about. I love not knowing who I’ll meet in the upcoming months, but I also love being sure I will meet someone who will treat me with kindness. It helps me remember we are all the same, which helps me extend kindness back out into the world as well.

Weird or not, I just can’t see that as a bad thing.