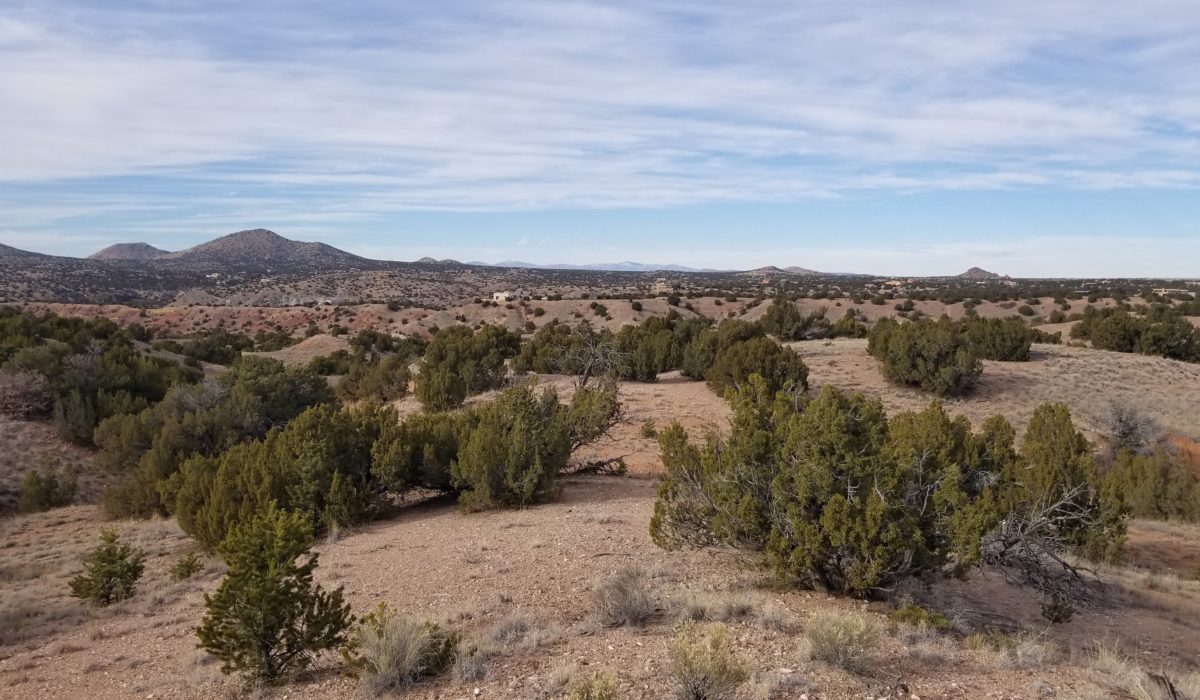 Last weekend, I decided I was in need of an adventure. My choice of destination was none other than Santa Fe. Situated only 1.5 hours from where I’m staying, it’s far enough to get out for the day and close enough to make it home in time to feed the boys.

I was excited to see more of what I already know to be an amazingly beautiful state. Not only do I get to look at this view each day:

But I get to enjoy beautiful sights just about everywhere I go.

I’ve learned in my travels that I’m unable to just show up somewhere, wander around, then enjoy myself; so Friday night before my adventure, I put together a loose outline of the day. I was vigilant about adding things that felt right and removing those that didn’t. I also stayed very aware of trying not to pack too much into the day.

The plan was to go to the old part of the city and peruse for Xmas gifts, then head to get some hot chocolate which a friend said was worthwhile. I decided on the old part of town despite a friend saying how much he hated it. I figured since it was my first time in the city I should at least check out the historical area, since that’s what people ‘should’ do. Boy was I wrong… ish.

I got to Santa Fe around 11, parked, then began my wander. I tried, really tried, to enjoy the shops and galleries that abounded. Yet, I couldn’t. All I could do was scoff at it all. It just felt so… prescribed!

I was able to wander into a shop which felt less yucky than most, but after an hour or two I was spent. I did manage to enjoy the architecture and sight of the area a bit though. Here let me share that with you:

On my way out of the area, I wandered past a sign pointing to a second floor shop which sold “Arte, Libros, y Musica”. I was sold. Like metal to a magnet I ascended the stairs and wandered into a book filled shop straight out of the pages of a C.S. Lewis novel.

As I looked at the materials around me, I noticed something strange. Sure enough all the materials were written in either Spanish or Portuguese. My brain made this connection as a voice appeared from a room further back.

From there I hacksawed my way through more Spanish until the man had mercy on me (probably more himself given my language abilities) and began speaking English. I went on to have quite the conversation with the shop owner who informed me I was in the second largest Latin American book store in the country!

We talked books, Mexico City, politics, you name it. I left the shop feeling connected and renewed.

And, ready for hot chocolate.

At the chocolate shop I had another in-depth conversation, and an amazing hot chocolate made from a native recipe which was 100s of years old! At this I decided it was time to head back.

On the drive I reflected on the day, and I observed myself starting to scold myself for not “enjoying the old part of the city more”. I stopped myself this time, then gave myself permission to accept myself instead.

It’s ok if I do or don’t like something that people say “should” be done. It’s also ok NOT to do these things which I know I don’t enjoy. In fact, my aim is to do less of what I don’t like and more of what I do like. If this means less touristy commercialism and more random conversations with strangers, you know I’m game.